Early Identification and Early Intervention in the Birth-to-Three Population

Early identification of speech-language delays/disorders and other developmental conditions through early and regular developmental and behavioral screening is critical. The identification of delays during these screenings should result in timely referral to Early Intervention (EI) to ensure a thorough evaluation and subsequent initiation of appropriate specialized services.

CJ was a 2-year, 9-month-old boy referred to EI at 26 months of age due to a delay in expressive language skills and severe speech sound disorder (SSD). He was full-term and the first-born child to his 44-year-old mother. Delivery was prolonged, yet otherwise unremarkable. Newborn hearing screening and metabolic screening were unremarkable.

CJ’s mother reported that she first became concerned when CJ was around 12 months of age as he was still babbling with no intelligible single words and often batted at his ears. The American Academy of Pediatrics recommends the administration of standardized developmental screening at 9, 18, and 24 or 30 months with an autism-specific screening at 18 and 24 months. According to CJ’s mother, his pediatrician used “developmental forms,” but did not discuss any results. When she expressed concern regarding CJ’s communication delays and the persistent batting of his ears, the pediatrician informed her that CJ had fluid in his ears, but no infection and no further action was taken.

At 24 months of age, CJ’s mother learned of EI through a colleague, who also recommended that CJ be evaluated by an audiologist. The audiologist referred CJ to an ear, nose, and throat physician who immediately placed bilateral tubes in CJ’s ears and referred him to a local EI agency.

Upon enrollment in EI, the Goldman-Fristoe Test of Articulation-Third Edition (GFTA-3) was administered.4 At 33 months of age, given the severity of CJ’s SSD, the Khan-Lewis Phonological Analysis-Third Edition (KLPA-3) was administered as part of a comprehensive evaluation for public school developmental preschool (Part B services).5 The KLPA-3 is a norm-referenced, in-depth analysis of phonological process usage in individuals ages 2;0 – 21;11. Designed as a companion tool to the GFTA-3, the KLPA-3 provides an analysis of the GFTA-3 target words for any sound changes and allows for the identification of phonological processes used to produce those sound changes. Though single-word measures of speech production have limitations and should not be used in isolation, such measures have utility when assessing children with unintelligible speech as a means of identifying the target word. 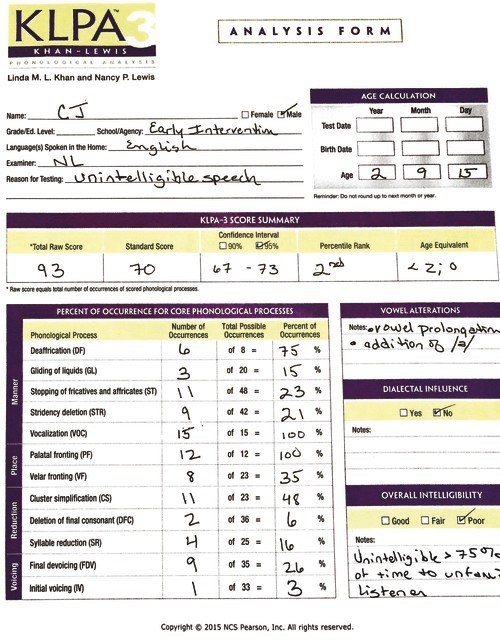 Fig. 1KLPA-3 summary of standard scores and percent of occurrence of the core phonological processes for CJ at age 2;9.

CJ’s Phonetic Inventory is shown in ▶ Fig. 2. The Phonetic Inventory is a visual display of the sounds a child does and does not produce regardless of the accuracy, relative to the target, in word-initial, word-medial, and word-final position. Each table is arranged horizontally by manner of production and vertically by place of production. Voiced and voiceless cognates are side by side. On the KLPA-3, when a sound is produced accurately as the target, that phoneme is circled. When there is a sound change from the target sound, a tally mark is placed in the appropriate cell. For example, if the target word “five” is produced as “dive,” a tally mark would be placed in the word-initial /d/ cell (target /f/ became /d/) and the word-final /v/ would be circled (correct production of target). The organization of the Phonetic Inventory by place, manner, and voicing displays clinically relevant trends in a child’s speech repertoire, such as overuse of a particular type of sound or complete omission of other types of sounds, at a glance.

Fig. 2KLPA-3 phonetic inventory of consonants in single words for CJ at age 2;9.

The summary of consonants analysis in Fig. 69.3 reveals the following:

Description of Disorder and Recommended Treatment

EI, a federally mandated service, is operated in states as a comprehensive, coordinated interagency system that provides multidisciplinary interventions for infants and toddlers with or at risk for developmental delays. EI is designed to serve children under the age of 3 and their families. Communication difficulties are among the most widely reported developmental delays in this age group. Speech-language pathologists (SLPs) and audiologists play an essential role in the early identification of developmental concerns to ensure linkage to services. Communication delays may present in various ways; however, SSDs are highly prevalent and are identified in approximately 15.6% of 3-year-old children. The majority of children receiving EI services qualify with a communication delay. The DSM-V1 provides the following criteria for SSD: (1) persistent difficulty with speech sound production; (2) disturbance causes limitations in effective communication that is interfering; (3) onset in early developmental period; and (4) not attributable to congenital or acquired conditions. SSD includes the conditions formally referred to as articulation disorders and phonological disorders.

CJ presented with a severe SSD characterized by frequent use of multiple phonological processes, both typical and atypical, along with a limited phonetic repertoire. Through his EI program, CJ received weekly visits from a certified SLP and bimonthly visits from a developmental specialist. Initially, a sound-by-sound articulation treatment approach was used as demonstrated by the goal: “Correct production of initial /p/ and /b/.” After 6 months of EI services, CJ’s speech remained highly unintelligible with a high frequency of multiple phonological processes usage and speech sound errors.

When CJ transitioned from EI services to the public school developmental preschool services, the treating SLP used a systems-level phonological approach to intervention. Broad diversity exists in the literature regarding approaches to target selection, intervention, and service delivery.3 Though the importance of a systematic approach to target selection is indisputable, some advocate for a developmental approach by building on early-to-develop, stimulable sounds, while others advocate for a paradoxically distinct complexity approach that promotes the prioritization of late-developing, nonstimulable sounds.

Treating children with SSD presents challenges. Assessment relies on the accurate transcription of unintelligible speech and a deep analysis of the rules, or phonological processes that impact the sound changes. Furthermore, clinical decisions include:

In summary, a phonological approach to intervention with children with SSDs is based on the rule-governed nature of the phonological system. Phonological processes describe patterns of errors within a phonetic environment. Treatment goals may target entire classes of sounds (e.g., decreasing the use of Stopping of Fricatives and Affricates), word structure (e.g. decreasing Deletion of Final Consonants), and/or distinctive features such as voicing errors (e.g., decreasing Final Devoicing) rather than targeting correct production of individual sounds towards a percent of accuracy. The research on phonological remediation reports generalization of accurate production to sounds that are not targeted directly, thereby increasing the likelihood of improved speech intelligibility while decreasing the time achieving this goal.

After review of CJ’s comprehensive evaluation for speech-language services within the Part B special education preschool program, a developmental approach to treatment was recommended. Initial targets included the decrease of Stopping. Typically, Stopping involves the sound change from fricatives and affricates to stop consonants. In CJ’s case, he used Stopping not only for fricative and affricates, but also on nasals and glides. Stopping of Other Sounds is considerably less common than Stopping of Fricatives and Affricates and has a negative impact on intelligibility. In spite of the consistent occurrence of Stopping, CJ’s Phonetic Inventory included instances of fricative productions in word-initial, word-medial, and word-final positions. Treatment methodology benefited from CJ’s fricative productions in his phonetic repertoire to influence the decrease of Stopping.

Questions (and Answers) for the Reader

Answer: b is correct. In 2006, the AAP adopted a set of guidelines for developmental and autism screening.2

a is incorrect. Though some pediatricians may screen children at every well-child visit, the current AAP guidelines call for a periodicity schedule of developmental screening at 9, 18, and 24 or 30 months with specific autism screen at 18 and 24 months.

c is incorrect. The AAP recommends surveillance by pediatricians at every well-child check visit and developmental/behavioral screening at 9, 18, and 24 or 30 months. The AAP supports the concept that early childhood screening is an essential component of health supervision and provides a foundation for monitoring and supporting healthy physical, cognitive, and psychosocial development.

d is incorrect. The AAP guidelines include a periodicity schedule for administration of an autism-specific tool at ages 18 and 24 months.

Answer: a is correct. This response is correct. EI providers complete a comprehensive, multidisciplinary assessment to determine the eligibility for services. States determine the percent of delay that a child must demonstrate in one or more developmental domains to be determined eligible.

b is incorrect. Income level is not part of the eligibility criteria for EI services. EI programs provide services to families across the income spectrum.

d is incorrect. Geographic location is not part of the eligibility criteria for EI services. EI programs provide services to eligible families regardless of residence.

Answer: e is correct. The DSM-V definition for SSD includes criteria of the four components listed above. SSD is a persistent condition that interferes with communication via multiple speech sound production errors. It presents in early childhood without a known congenital or acquired cause.

Answer: e is correct. A phonological approach to assessment provides the clinician with in-depth information regarding a child’s speech production system and enables the clinician to integrate the results into treatment plans.

a is incorrect. A phonological approach to assessment of SSDs in children is an in-depth analysis of the rules and patterns that govern a child’s multiple speech production errors. The approach involves identifying the phonological processes, or patterns, that the child employs that contribute to reduced speech intelligibility.

b is one of the correct answers. A phonological approach to assessment of SSDs in children requires the collection of a preponderance of evidence including phonological process usage, phonetic environment of patterns of errors, and the phonetic inventory of available sounds.

c is incorrect. When a child presents with SSD, typically there is reduced speech intelligibility, oftentimes unintelligible speech production the majority of the time. Phonological assessment requires the examiner to compare the child’s speech production to the intended target word or phrase, a task that is often not possible with children presenting with highly unintelligible speech.

d is one of the correct answers. The summary from a phonological assessment provides the information needed to determine phonological treatment goals and objectives and to identify treatment stimuli.

At 3 years of age, CJ qualified for services through the public school Part B special education services based on his severe SSD. He participated in a 4-day per week developmental preschool program designed for children with severe SSDs and received individual therapy for 30 minutes, four days a week. The SLP collaborated with the special education preschool teacher to integrate opportunities for CJ to practice his speech/language goals within classroom activities. CJ also received follow-up audiological services every 3 months to monitor hearing acuity and middle-ear function.

KLPA-3 was administered after 6 months of intervention. ▶ Table 1 demonstrates the change in the quantitative metrics. CJ demonstrated a 25% reduction in the Raw Score, a metric based on the number of occurrences of the 12 Core Phonological Processes. CJ’s KLPA-3 Standard Score and Percentile Rank continued to qualify him for speech/language services. The Process-Per-Word measure was sensitive to the improvement in CJ’s overall speech intelligibility.

At 42 months, CJ’s mother reported that he had recently demonstrated a significant gain in his overall speech intelligibility. Family members and his preschool teachers were better able to understand CJ’s speech production. As well, CJ’s expressive language skills improved, and he appeared more confident and willing to engage with others at school and at home.