A Case for Real Ear Measures

BA is scheduled for a comprehensive audiological examination and hearing aid evaluation (HAE). He obtained bilateral receiver-in-the-canal (RIC) hearing aids 3 to 4 years ago from a large retail chain. He notices benefit with the hearing aids, but believes he is not hearing as well as he should, particularly in noisy listening situations. Real ear insertion gain (REIG) measures revealed minimal insertion gain bilaterally when compared with the prescribed National Acoustic Laboratories’ non-linear fitting formula version 1 (NAL-NL1).

BA is a 68-year-old male who was initially examined by an otologist due to BA reporting decreased hearing in the right ear following an upper respiratory tract infection that began two months ago. BA reported hearing loss since middle school due to an extensive history of ear infections as a child. BA also reported a number of myringotomies that included insertion of pressure-equalization tubes. BA stated that his right ear had better hearing until the upper respiratory tract infection. BA started wearing bilateral RIC hearing aids three to four years ago, and he stated he had a family history of hearing loss that included his grandfather. He had a significant history of noise exposure as a result of working in construction for approximately 40 years.

Otoscopy for the right ear revealed amber fluid behind the tympanic membrane and the tympanic membrane was retracted. Otoscopy for the left ear revealed that the tympanic membrane was also retracted, but fluid was not present behind the tympanic membrane. The otologist’s examination reported right chronic otitis media, and BA’s hearing loss was thought to be due to the combination of presbycusis, excessive exposure to noise, and genetics. The otologist recommended a follow-up appointment in one month with a repeat audiological examination and a head computed tomographic (CT) scan. The otologist also recommended using an Otovent (Abigo Medical AB, Askim, Sweden). The Otovent consists of a nose plug and latex balloon. The patient pinches one nostril shut and puts the Otovent in the other nostril and, by blowing air through the nose, inflates the latex balloon. Once the balloon is inflated, the air from the balloon reenters the nostril, creating positive pressure, the patient swallows and the eustachian tube opens allowing fluid to drain from the middle ear. 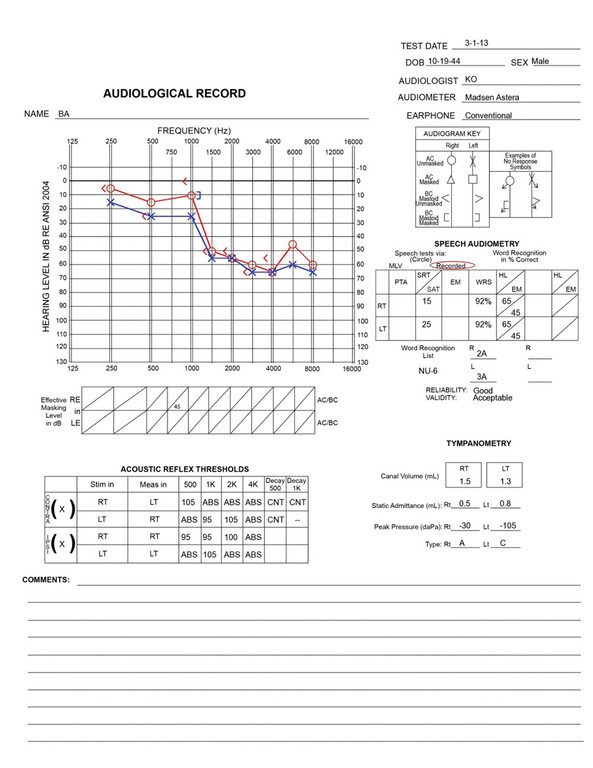 As mentioned earlier, BA wore bilateral RIC hearing aids with directional microphones and open domes. He purchased the hearing aids from a large chain, which was an approximately four hour drive away due to the low cost of the hearing aids compared with other clinics in his area. BA thought he received benefit from the hearing aids, but was disappointed with how he understands speech in noisy listening situations. BA questioned if his ability to understand speech in background noise could be improved.

Questions to the Reader

Discussion of Questions to the Reader

Prior to REMs, the hearing aids were dehumidified, and the wax guard and dome were examined to make sure each was free of wax. Electroacoustic analysis was performed using the Frye FONIX 6500® Hearing Aid Analyzer (Frye Electronics, Inc.©, Tigard, OR) using ANSI S3.22–1996 and a completely-in-the-canal (CIC) coupler. Results revealed reference test gain of 20.5 dB in the right ear and 19.0 dB in the left ear, which showed that the patient’s hearing aids were operating. The patient’s audiological data were placed into the Frye FONIX 8000 Hearing Aid Analyzer®, and the NAL-NL1 target was corrected for binaural and channel summation (six channels). REIG measures were performed using a 65 dB SPL input level of the DigiSpeech (intermittent speech-weighted) signal (Fig. 55.2). Results revealed minimal gain bilaterally compared with NAL-NL1. One possible reason for the differences in coupler versus real ear gain may be due to the coupling of the hearing aid to the ear, because the hearing aid receiver had an open dome and loosely fit at the outside of his ear canal; this may allow the amplified sound to leak out of his ear canal. Another reason may be due to the acoustics of BA’s ear canal (i.e., large ear canal, large real ear unaided gain [REUG], etc.) and the need for more gain to compensate for this. It was noted that BA had a large REUG (20 dB bilaterally around 2500 Hz), which means the hearing aid would need to provide more amplification to overcome the insertion loss of the hearing aid to meet the NAL-NL1 target, although it is expected that there would be minimal insertion loss with an open-fit hearing aid. 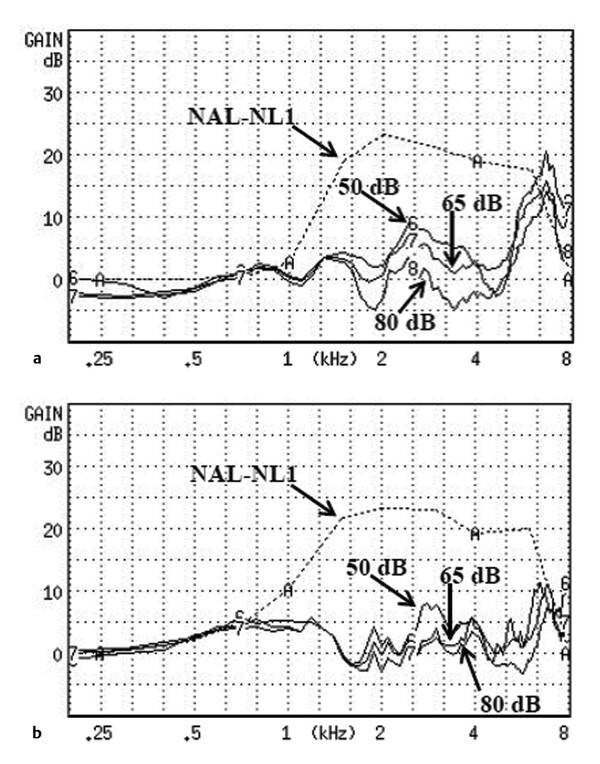 Fig. 55.2 Real ear insertion gain (REIG) measures for input levels of 50, 65, and 80 dB SPL using a DigiSpeech signal for the right (a) and left (b) ear. Also included is the NAL-NL1 target corrected for binaural and channel summation.

Although the reference microphone was not deactivated for testing, it is expected that having the reference microphone activated would not have resulted in poorer than measured REMs because the prescribed gain was less than 25 dB. The patient was counseled on the limited amount of amplification he is receiving with his hearing aids. He was provided with a copy of the results, as well as instructions on the frequency regions (1000 to 6000 Hz in the right ear and 1000 to 6000 Hz in the left ear) that needed more gain in order to provide appropriate amplification according to NAL-NL1.

BA returned to the otologist two weeks later. It was noted that the CT scan was normal, except for slight fluid in the right mastoid. A medical examination revealed that BA no longer had retracted tympanic membranes or fluid behind his right eardrum. BA reported he was working with the dispensing professional at the large retail chain to have his hearing aids reprogrammed to a more appropriate level for his hearing loss.